HELGE LARSEN: 1929 - 2021 Helge Esben Larsen was a pioneer in contemporary jewellery, silversmithing and design and a leading educator in his field. Helge was part of a professional partnership, Larsen & Lewers, formed with Darani Lewers in 1961. It was a unique example of two people integrating and developing a collaborative art practice in which their ideas and material execution were indistinguishable. They pioneered the development of contemporary jewellery within the broader context of Danish design in Australia and forged an artistic reputation of international renown.


Helge was born in Denmark on September 27, 1929. He completed a four-year apprenticeship and a two-year diploma course in Art & Design in Copenhagen. From 1955-57 he participated in an American/Scandinavian student exchange programme working in Denver Colorado with the silversmith, Stig Gusterman. Part of his time was spent living and working with the Navajo Indians, a Native American people in New Mexico, where he developed a particular interest in the organic modular shapes and structures of the adobe housing. Returning to Denmark in 1957, Larsen worked as a master jeweller in Copenhagen and with Harald Jensen established Solvform, a successful jewellery and silversmith studio and shop. He first met Darani when she walked into their shop seeking experience and training. Having enjoyed his time in the United States he took her on, at first believing her to be American. Darani trained for nine months with Helge and Harald and after further travel in Europe returned to Australia, persuaded by her mother, the Modernist painter Margo Lewers, that Sydney was ready for new forms of creative expression in contemporary jewellery, as an alternative to the conservative and imitative commercial designs that prevailed. He was well established in Denmark in 1960. However, when the prospect of becoming sole proprietor of Solvform came up, he chose instead to join Darani in Australia. Soon after his arrival in Sydney in 1961 he and Darani set up their first workshop in George Street, The Rocks. There they completed work developed in Copenhagen for an international exhibition of Modern Jewellery 1890 -1961 for the Worshipful Company of Goldsmiths, in association with the Victoria and Albert Museum. They were also preparing for their first Australian exhibition at Macquarie Galleries in Sydney. The exhibition at Macquarie Galleries received critical acclaim along with opportunities to exhibit around Australia. Thus began a career as leaders in the new movement of jewellery and silverware; in a working partnership that spanned their life together they staged over 70 solo exhibitions, contributed to numerous group exhibitions, as well as undertaking many major commissions.

In 1962 Darani and Helge bought an artist’s house at Seaforth on Sydney’s Middle Harbour, where they lived and worked for the next sixty years. While they worked toward exhibitions their son Tor, and daughter Pia spent many hours in the studio learning to use the tools for their own projects. A way of life that established the creative connections within the family along with an understanding of the commitment to work and live as an artist. They also collaborated with their parents on large-scale commissions for liturgical and ceremonial work, including a suspended light fitting for the New Parliament House, Canberra and mace for the University of Technology Sydney and University of Western Sydney.

In parallel with his studio practice, Larsen was offered teaching in the Industrial Arts Department at the University of NSW in 1962, where he worked until 1974. Concurrent with his teaching was his work with Marea Gazzard and other leading craftspeople, to found the organisational base for the crafts in 1964. Larsen was President of the Craft Association of NSW and part of the steering committee that established the Crafts Council of Australia in 1971. He was later appointed member of the Crafts Council Board.

In 1972-73 Larsen and Lewers were awarded a residency at the Cite Internationale des Arts in Paris. For nine months they lived in the small studio flat with their young children overlooking the Seine and Ile Saint-Louis. They explored the city; museums, cathedrals and parks inspiring the creation of work that incorporated the architecture and special configuration of the Parisian urban streetscape.

During this period they met leading contemporary jewellers in Austria and were invited to participate in several major events including a teaching opportunity in Salzburg. Helge attended both events on behalf of the partnership and made many new contacts. Over the following years he drew on the resulting networks, establishing international connections for students and staff at Sydney College of the Arts. A dialogue that culminated in the landmark “Cross Currents” exhibition in 1984, showcasing work of leading practitioners in contemporary jewellery from Australia, Britain, Germany, and Holland which placed Australian jewellers on the world stage. In 1976 Sydney College of the Arts opened, first with the School of Design followed in 1977 with the School of Art. Larsen was founding head of the jewellery and silversmithing studio. He taught during the day and worked with Darani in the studio at Seaforth by night. Larsen encouraged students to search for new forms and to experiment with alternate materials. Together with colleagues he fostered crossovers with other visual art disciplines, enriching the range and diversity of jewellery offered at the school. These innovative studies were the foundation for generations of professional jewellers who set up their studios to create a vibrant contemporary practice in NSW. In 1988 Larsen was appointed deputy director, academic, of SCA and in 1990 while acting director of the College he was promoted to associate professor of the University of Sydney. As head of the School of Visual Arts from 1991-1994 he was instrumental in integrating the college into a productive relationship with the wider university. He and Darani were awarded honorary degrees of Doctor of Visual Arts, University of Sydney in 2007. In the studio his depth of knowledge in working with metal and conceptual insight meant he was a teacher whose guidance was greatly valued. His teaching drew upon an understanding of the traditions and conventions of jewellery and silversmithing. This was a future in which all students were invited to participate, for Larsen was a mentor dedicated to liberating the creative language of each individual student. His intelligent and discerning advice was always delivered with good humour and an enthusiasm in aiding those around him as they pursued their own creative vision. The success of a great many can be traced back to his warm and generous artistic influence. Helge Larsen lived a life rich in creative achievements and influential in his contributions to Australian cultural life. 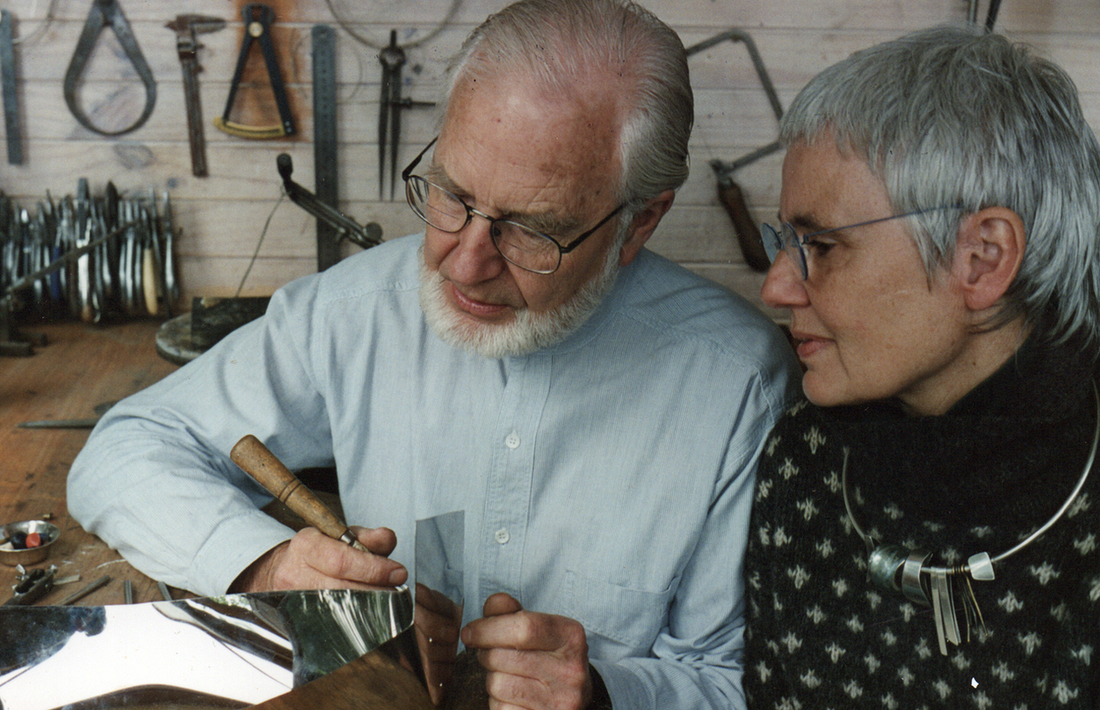 Helge leaves an immense legacy as an artist, jeweller, silversmith, teacher, mentor, and collaborator. Larsen also made a profound contribution to Sydney College of the Arts and the broader University of Sydney community.

Now located at The Old Teachers College, the SCA Jewellery & Object studio is a part of his legacy. Helge established the foundations for many past, present, and future students at SCA. He will be remembered as an extraordinary and generous artist, teacher, friend, father and partner.

Join family, friends and peers a year on to celebrate his life and art for a memorial service at SCA Gallery.


The Bundanon Trust in partnership with JMGA NSW have established an annual award for a residency at Bundanon in the Dwyer Smithing Studio. Applicants who have successfully applied and been accepted by the Bundanon Trust and who are current members of
​JMGA-NSW are eligible.

Dorothy Dwyer was a long time member of JMGA NSW and an accomplished silversmith and jeweller. Her family, Mikala and Stepanie Dwyer, donated all her studio tools and equipment to Bundanon Trust who in turn made available a space to establish a specialised studio. The studio has all the basic necessities, hand tools,  soldering, polishing, dust and fume extraction and an excellent selection of stakes. The studio is about the size of a single garage and was originally part of the machinery shed at Bundanon. Adjoining the smithing studio is a dance studio. Accommodation is in one of the apartments or cottages nearby.

Previous recipients have been Erin Pearce and Kirsten Haydon.


​Since 1980, the Jewellers and Metalsmiths Group of Australia has convened a biennial series of national conferences. These are unique occasions for bringing together objects, practices and ideas from across the continent as well as other lands.

Continuing this 40-year series, there was a conference scheduled at the Australian National University for this year. It had already been delayed one year because of COVID. Unfortunately, this year the Jewellery workshop was closed down and funds for the conference were absorbed by the university.

Rather than break the 40-year long chain of conferences and waste the considerable work towards developing the program, a re-distributed version of the conference has been developed.

Sessions that would normally be in one location over two days would now be distributed across time and space. These events will be held in conjunction with important contemporary jewellery exhibitions and festivals during 2021.

CLICK HERE TO LISTEN TO THE CONFERENCE RECORDINGS
Profile is only open to current JMGA-NSW members, please click on the links above to pay your membership fees.